This project has arisen from the current City Challenge on Dumping and Waste.

Our waste services can sometimes feel less than suitable for modern, urban, society. They can feel like they were designed for an able-bodied household, with a stay-at-home parent, living in a suburban house and owning a car whereas city-centre living in Dublin can be very different.

The fact that we have a different waste collection type for much of the city centre is an existing acknowledgment that they already warrant different consideration, and they're also the areas which are experiencing the greatest problems with the waste service.

What types of things should we be thinking about if we were to focus on the city centre and through the lens of modern living?

1. Comprehensibility and discoverability of the waste service

As part of the callout for solutions to the issue of dumping and improving waste services, the idea of shared domestic waste bins located on the public street - as is the common practice in many other European cities - was by far the most-regularly requested solution from the public.

They likely provide a simple solution to all 10 of the issues listed above and offer the potential of:

To begin the conversation, we would like to 'unbundle' the waste service into these 3 components - as we feel this will greatly help us to discuss this topic in a more useful way. 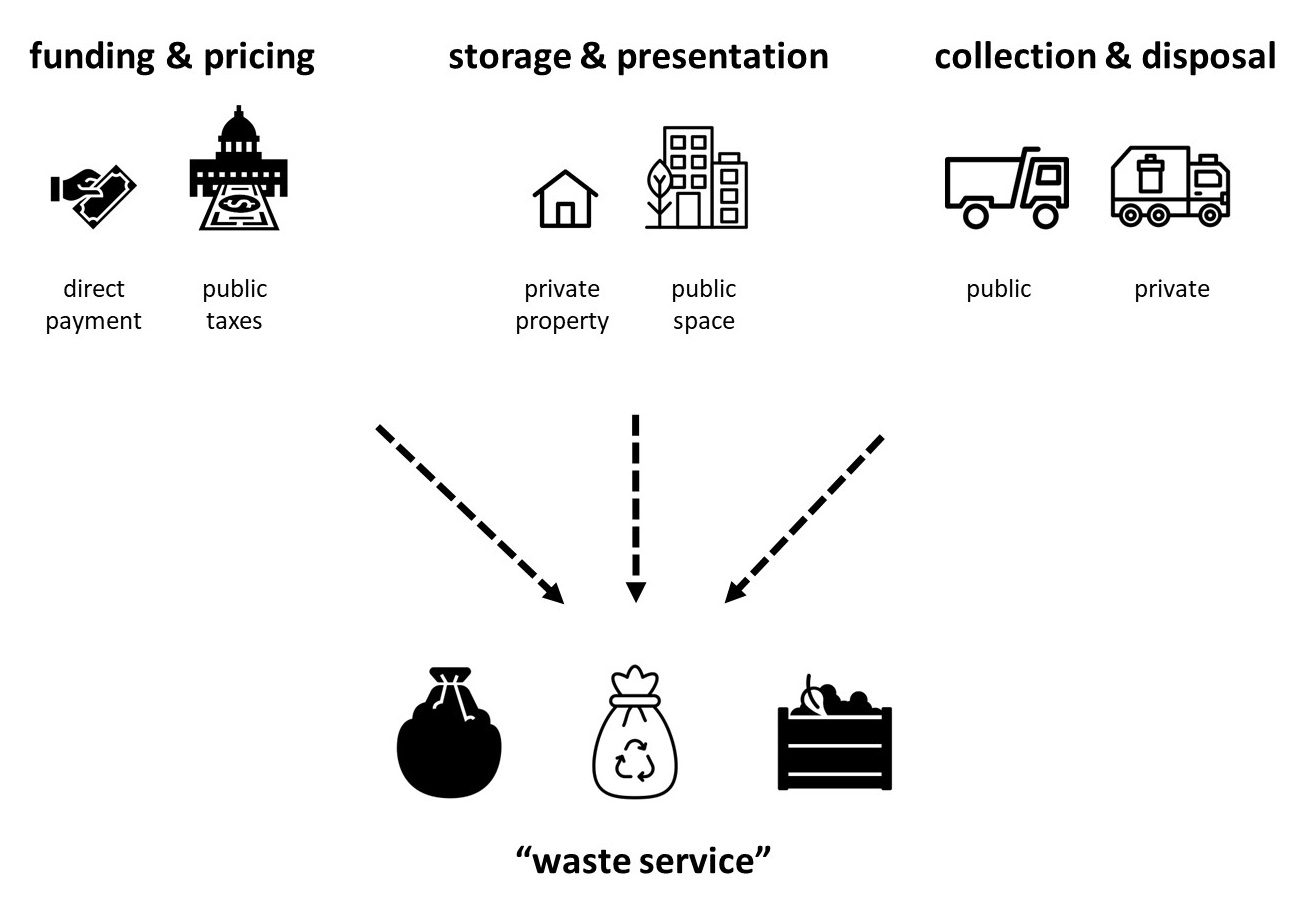 These 3 components can be combined in different ways to form a matrix of potentital means of providing a waste service. Sometimes they interlink, but in many cases they can be considered separately - taking two examples, waste can be collected publicly but paid for directly via invoicing (eg the model used by DCC for several years), or waste can be collected privately but paid for via public taxes (eg the model used in many continental European cities).

Moving from private storage to public storage of waste

Our current model, as per the diagram below, is one of interim storage (ie the period between collections) in private gardens or yards, with this waste then being presented for collection by using public footpaths once a week or fortnight. From the perspective of Dublin's city centre (the focus of this piece), this means that we're asking space-restricted households to use precious outdoor space, and that we're also using the busiest footpaths in the city to store waste often for quite long periods. 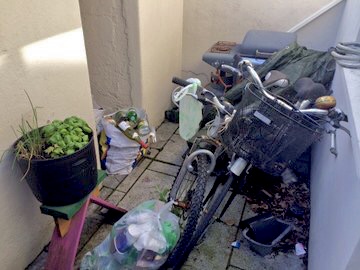 To begin with we'd explore an above-ground storage solution with some sort of bank of bins above the ground. (It's much easier to trial, and will also yield useful learnings in itself.) 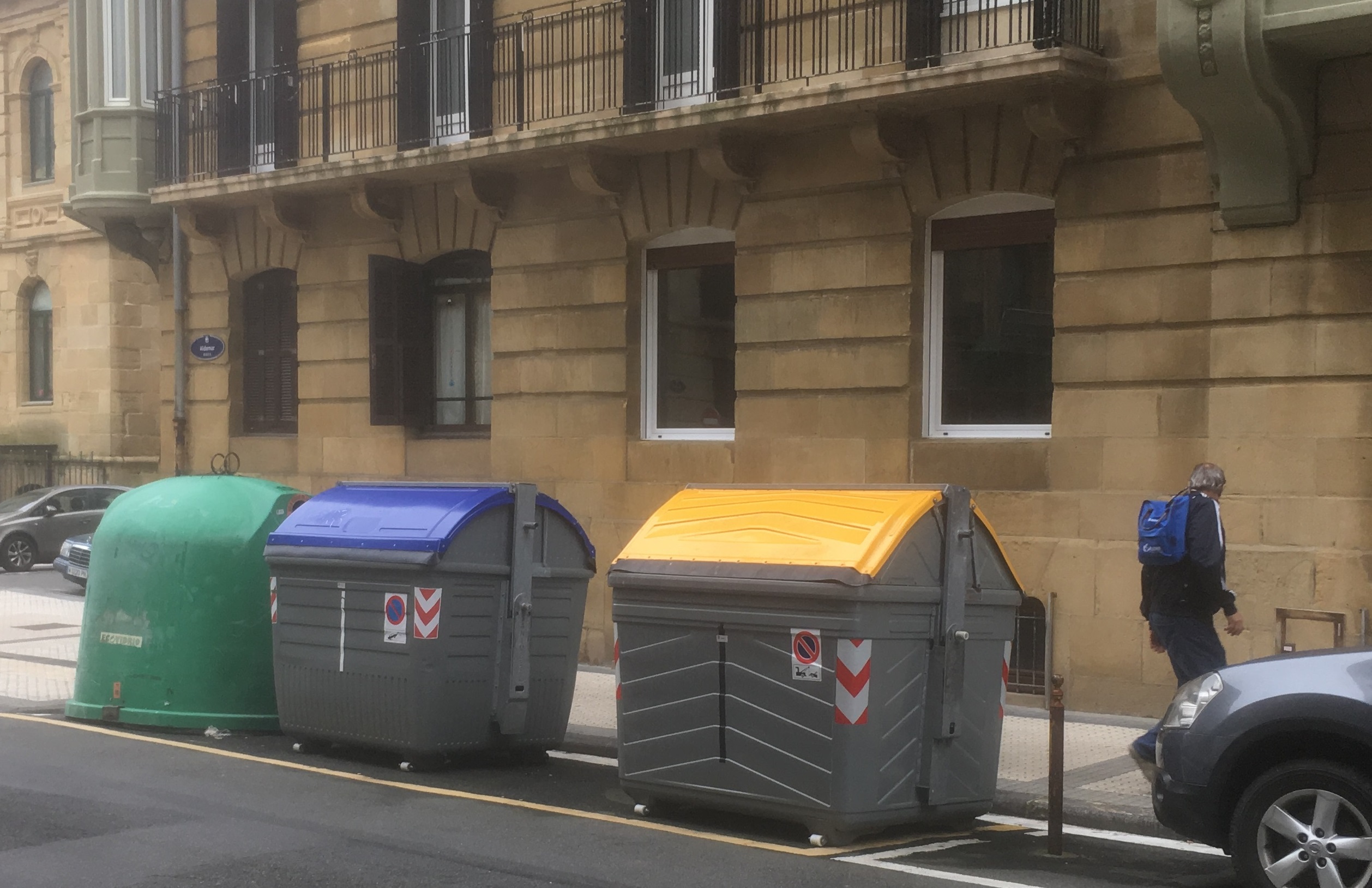 Depending on how the trials proceed, a later aspect to explore would be whether we could store the same waste below ground instead. 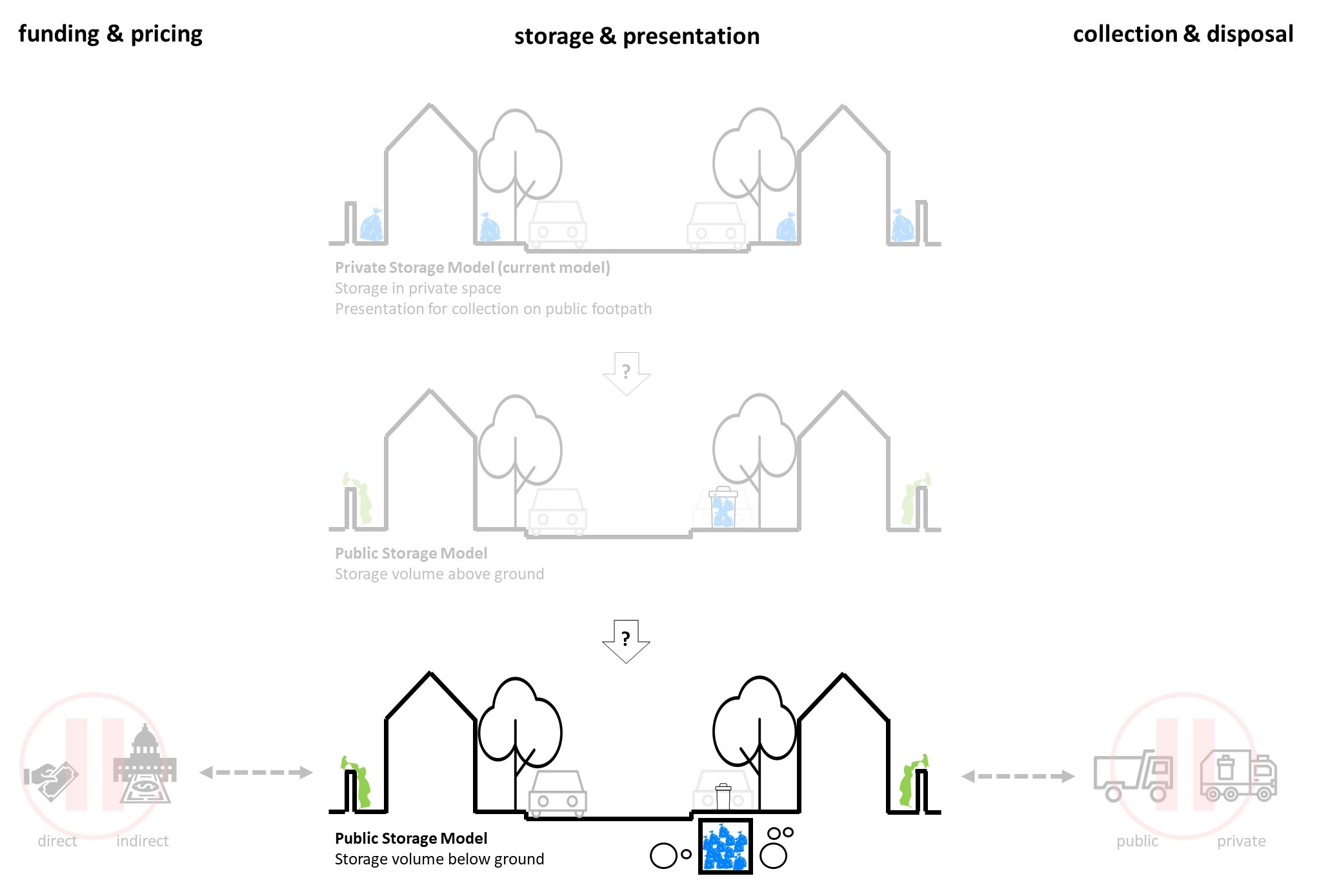 This would presumably benefit from having a smaller footprint above the ground, but there may be problematic issues such as existing utilities located below ground (pipes, optic fibres, power cables, etc), or there may be other issues such as flooding. 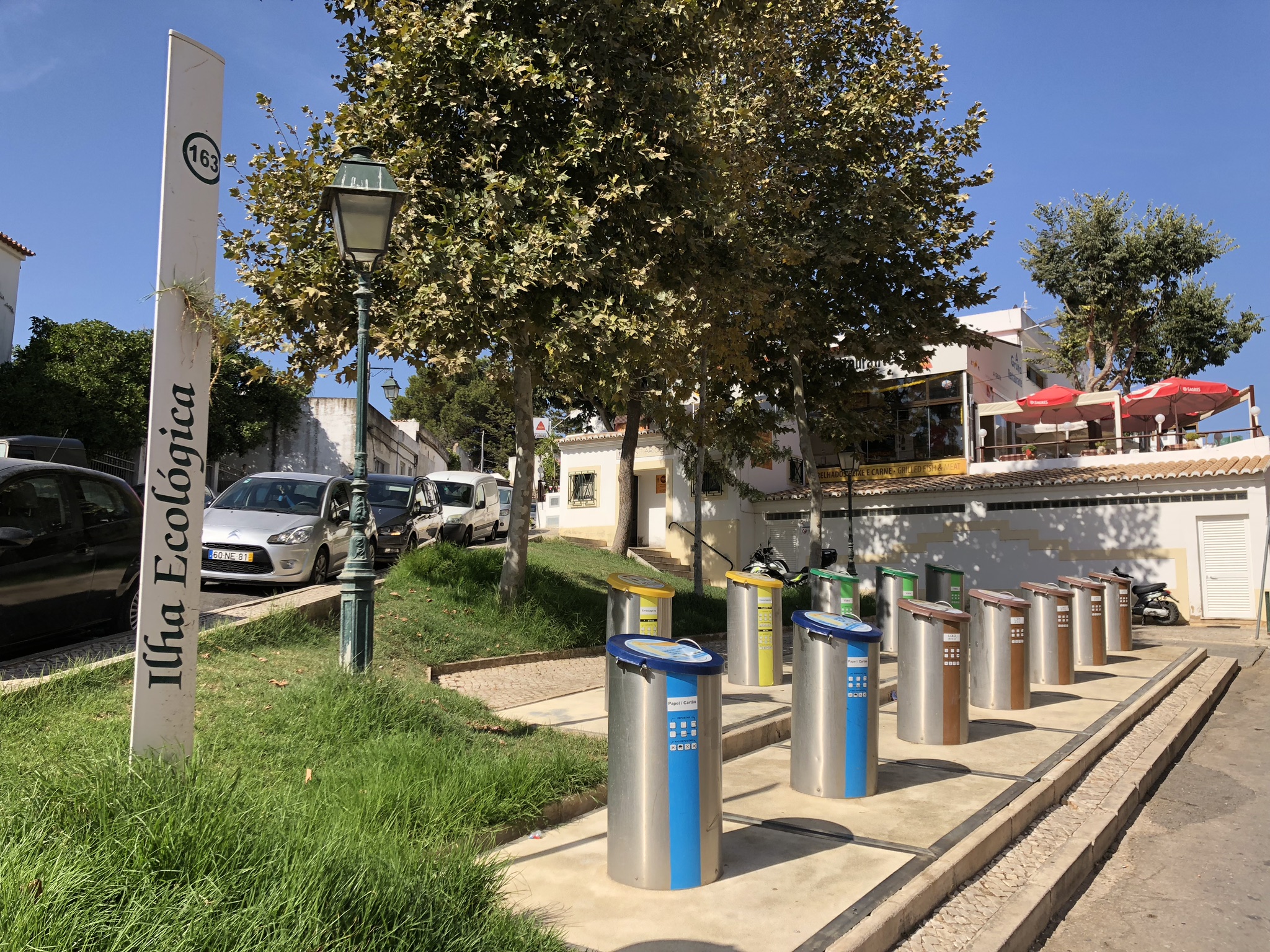 Or it could be that we'd use above-ground in some situations, and below-ground in others (and so it will have been useful to have explored both versions). 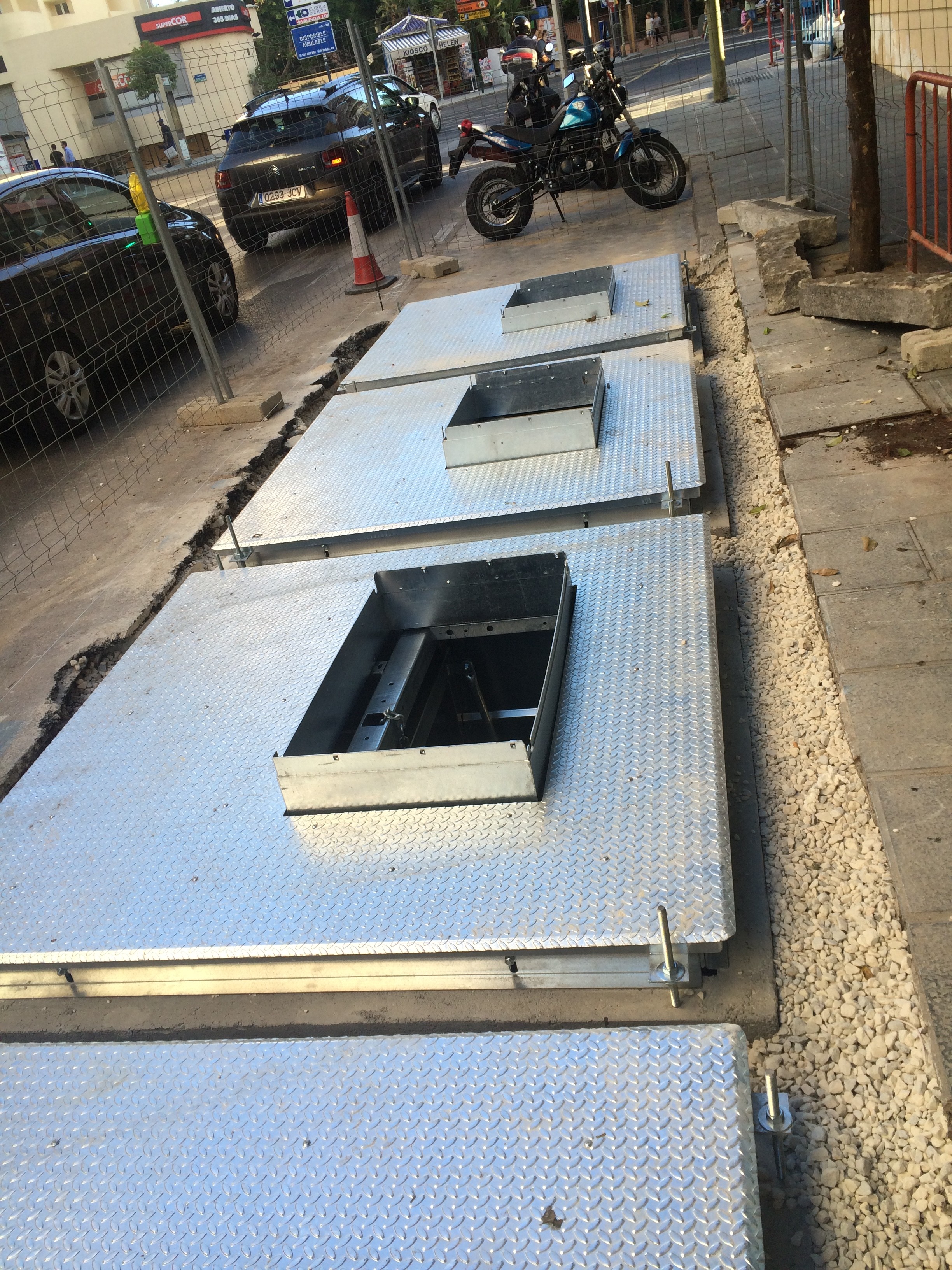 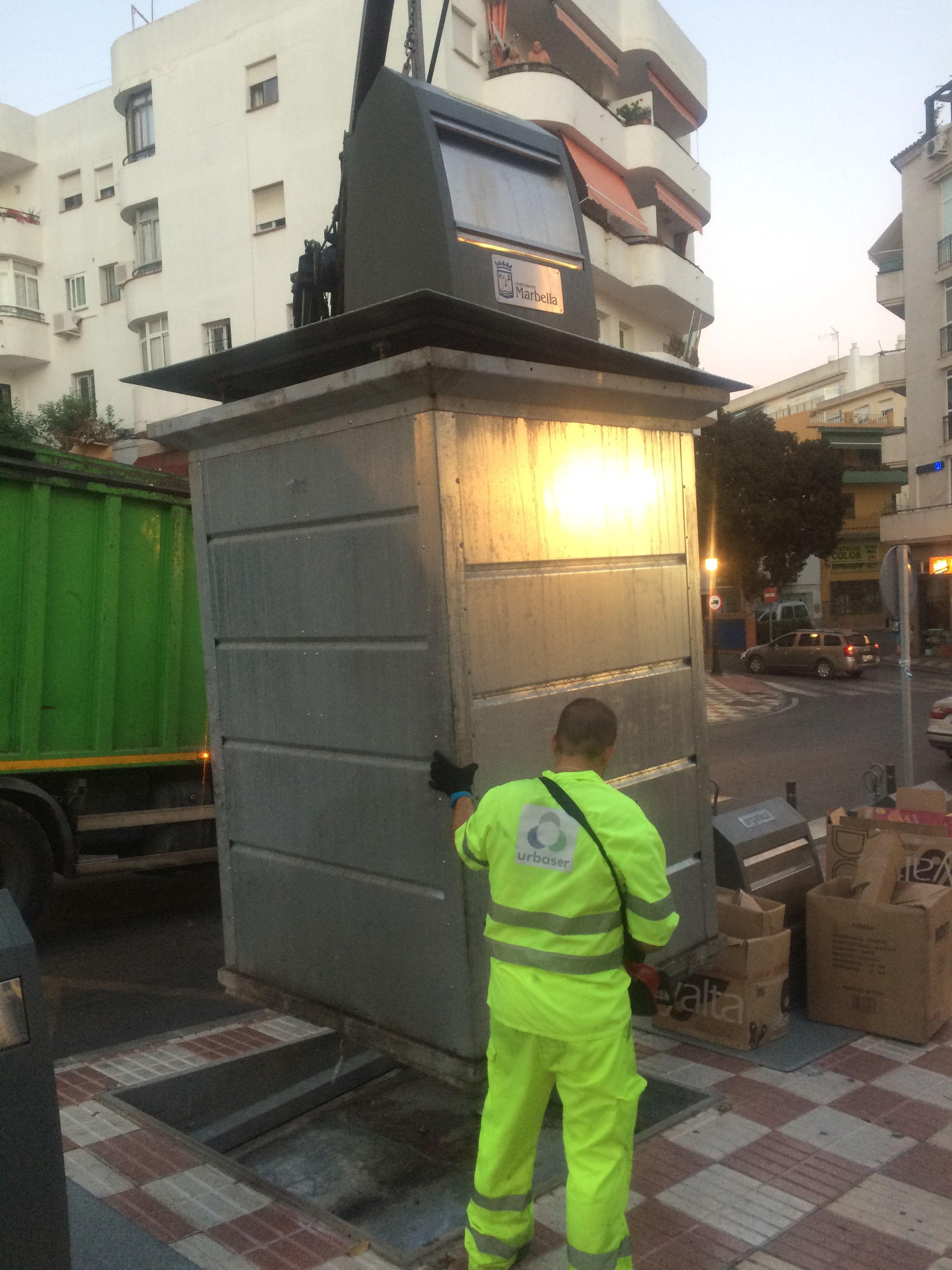 (Image: this photo of a bin being emptied in Spain gives you a sense of how large the above-ground and below-ground elements are relative to one another, and also the depth that they can go, which requires an extensive amount of works. They also require specialist equipment which the current collection vehicles in Dublin, both private and public, aren't equipped with.)

As noted above, the payment and collection aspects should follow as a separate conversation later. For example the below shared street bin could be paid for directly - eg using RFID swipe cards as used in the Netherlands, or indirectly via public taxes, or that they could also be empied by a private company(ies) or by the local authority, but from the residents perspective that's probably a mostly invisible aspect. Equally there's no point in having discussions about whether the current waste collection fleet is kitted out to empty such receptacles before we know whether we even want this solution at all. 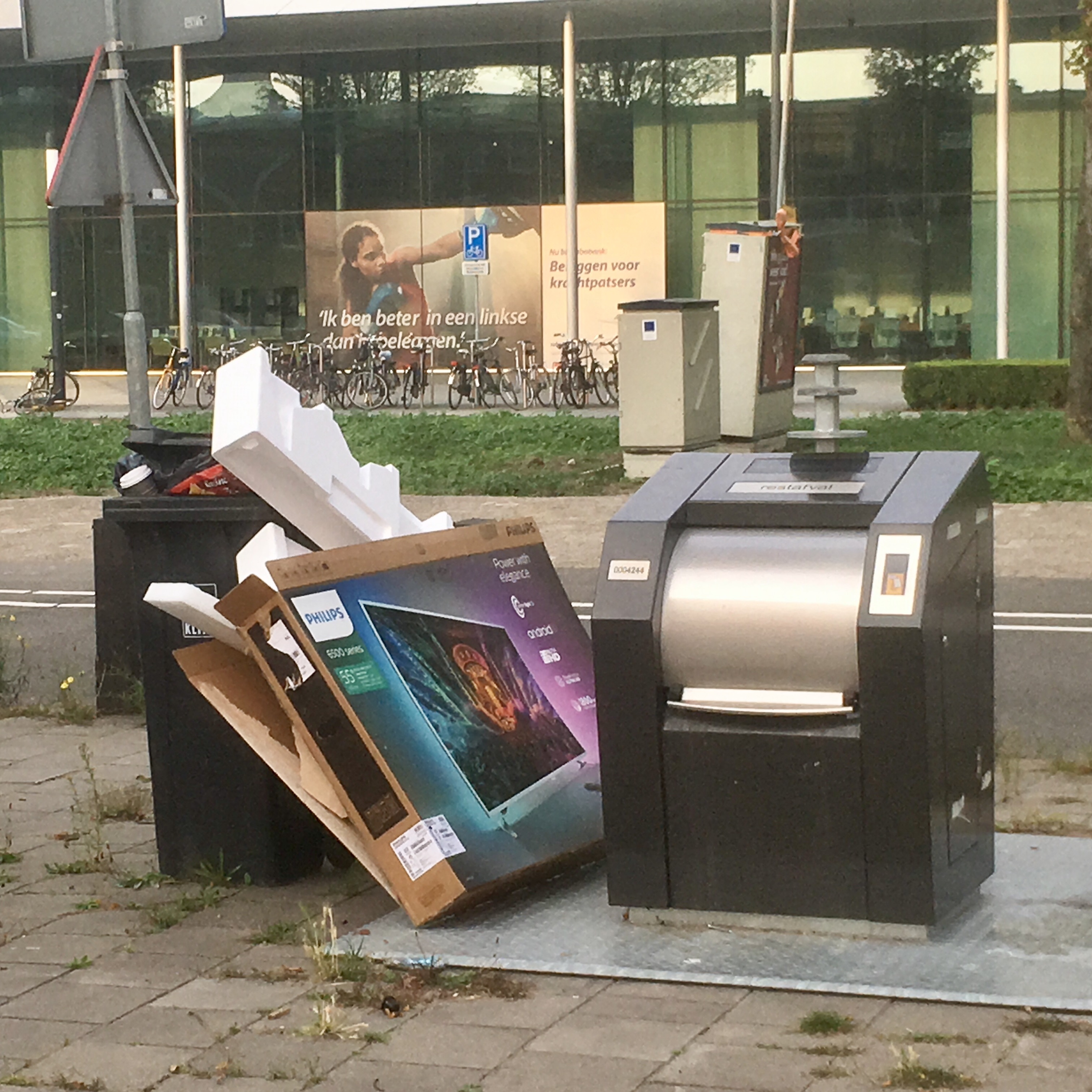 ​(Image: a shared bin in Utrecht, Netherlands, with an RFID card reader (on the right). Residents need to swipe with their card before they can deposit a bag. They get a certain amount of free deposits per month, and above that are required to pay per deposit.)

We will place a cluster of bins on a street to simulate the idea of public shared bins.

We would locate them:

Initially will aim to explore the following waste streams:

Very much depending on the feedback from the local residents after trialling the above waste streams, we could later agree to also explore the following additional ones with them:

We want to learn about: 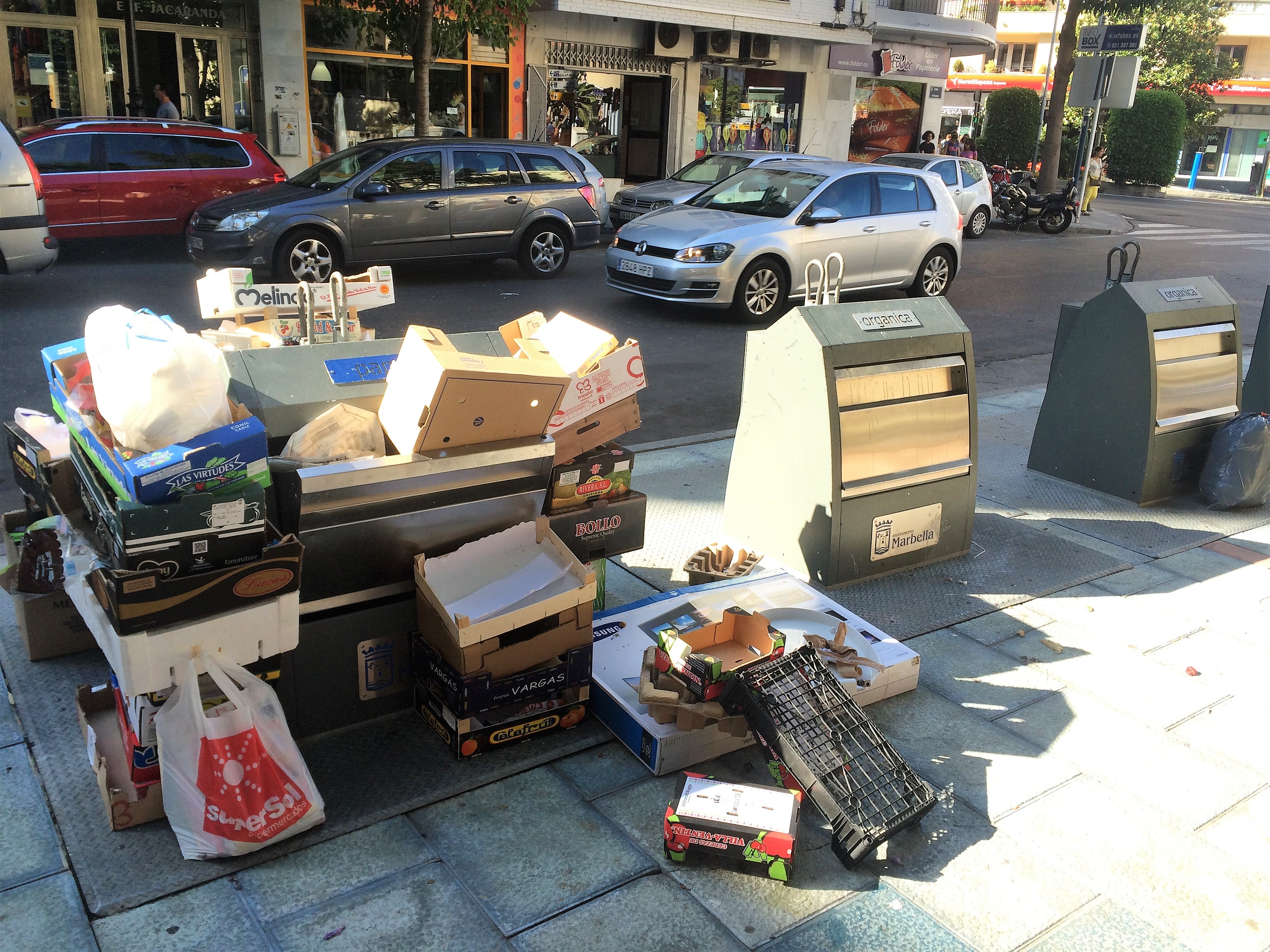 (Image: capacity issues at a bin in Marbella, Spain.) 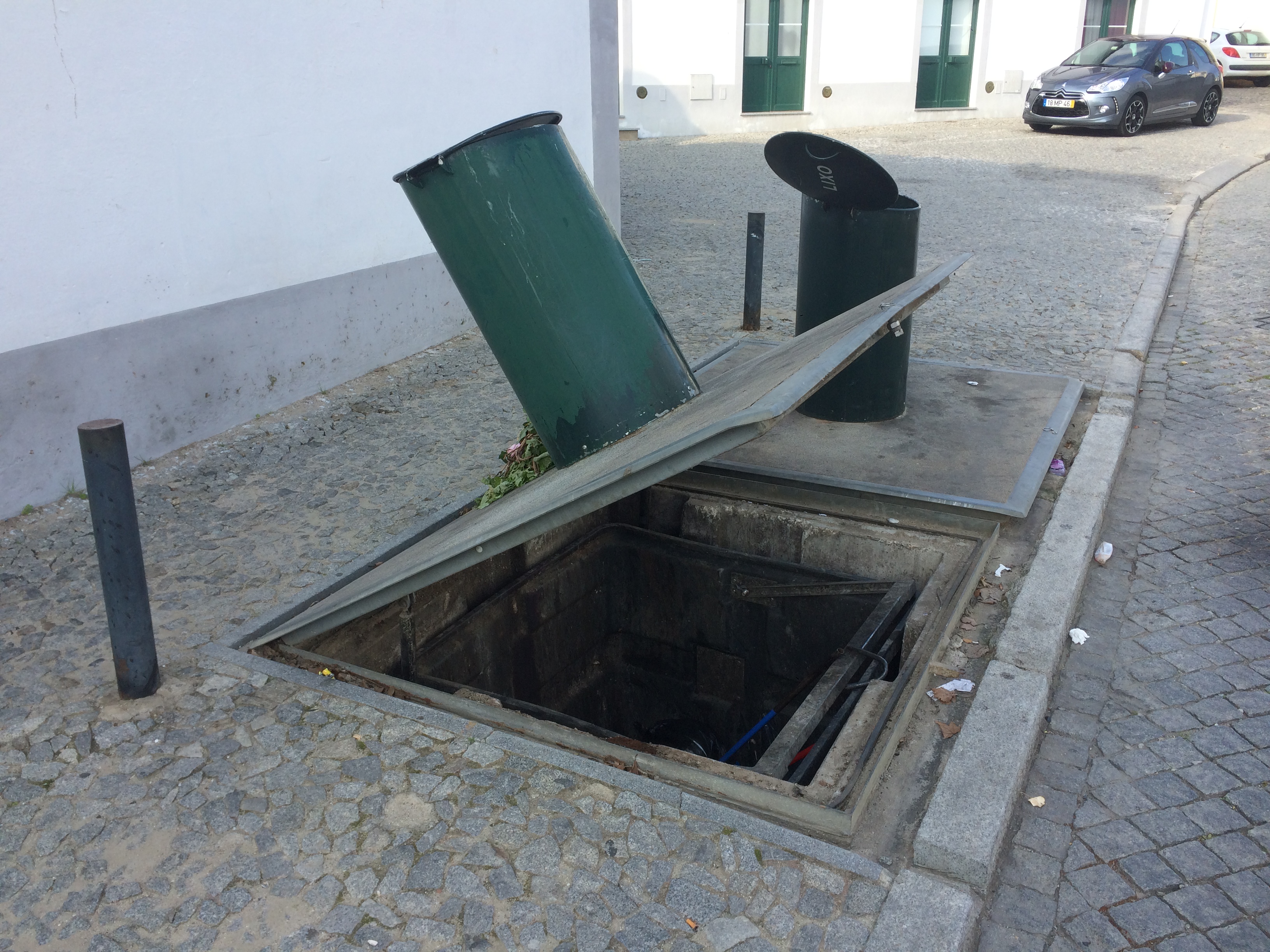 (Image: a subterranean bin in Evora, Portugal, which is broken and posing a risk.)

Read below description as to what we are thinking of doing. Please note that this project is at concept stage - therefore it will be trialled (perhaps several trials), but will be ultimately removed.

We're looking for a street with the following charactertistics:

Create your own user feedback survey