What is a Beta Project?
Beta Projects act as cost-effective trials that serve to address key issues that Dublin City Council is seeking to understand before implementing.

Can I suggest a project?
Anyone can suggest a Beta Project - just use the suggest link.

What suggestions have been made?
You can see all suggestions received in the Beta Project Pipeline.

What projects are being explored?
Just check out the Beta Project Pipeline to see. 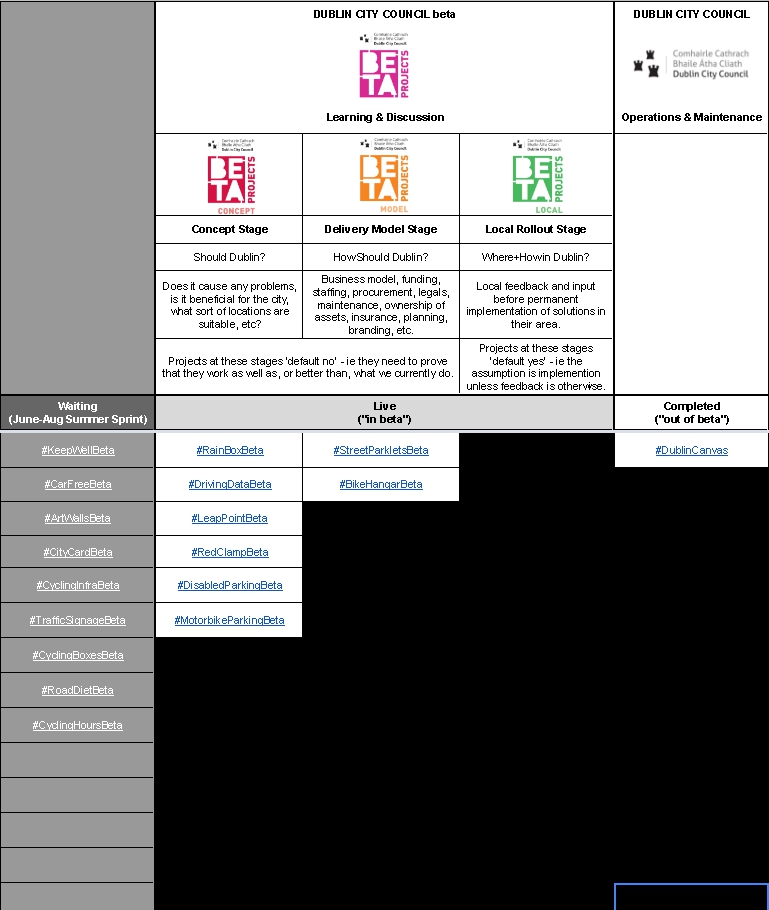 What's happening with live projects?
All projects follow a set series of steps. You can follow it here. Beta Project Pipeline.

Should the operational hours of cycle lanes be 24/7 rather than part-time? What would be the effects of such a change?

We don't differentiate between legal and illegal parking in terms of how we clamp. Would it be beneficial to do so?

Could we highlight transport interchanges? Would they help people get around the city and strengthen neighbourhoods?

Businesses can apply to put tables and chairs on the pavement. Could they apply to use car parking spaces in a similar way?

Should residents be able to apply to park their bicycles in an onstreet, shared, bicycle hangar near their home?

The street art community wants more walls on which they can paint. Might allowing that also solve some maintenance issues?

Could we use plant boxes to reduce the amount of stormwater entering our drains, whilst also greening our streets?

Would better driving behaviour data help us to design a better city? Would citizens be interested in providing some?

This Beta Project will look at the problem of love locks on the Ha’Penny Bridge (and neighbouring bridges and Boardwalk).

Could we help support the creation of an adult coding group for Dublin which solely focuses on civic issues and opportunities?

Should Dublin temporarily increase the amount of bicycle parking during the Summer half of the year?

Could we expand our libraries onto streets - allowing people to download books on the fly? For example, when waiting for the bus?