This is the approach that we’re trying...

It's therefore staffed by just one full-time staff member - a Dublin City Council Beta Coordinator - and is instead further supported by multiple part-time staff on an irregular (project-related) basis who we call 'Beta Champions'.

Knowledge can then more easily flow two ways...these staff are best placed to bring the expertise of their section and the issues that they know intimately, and equally bring any new approaches or insights learned back to their home section. 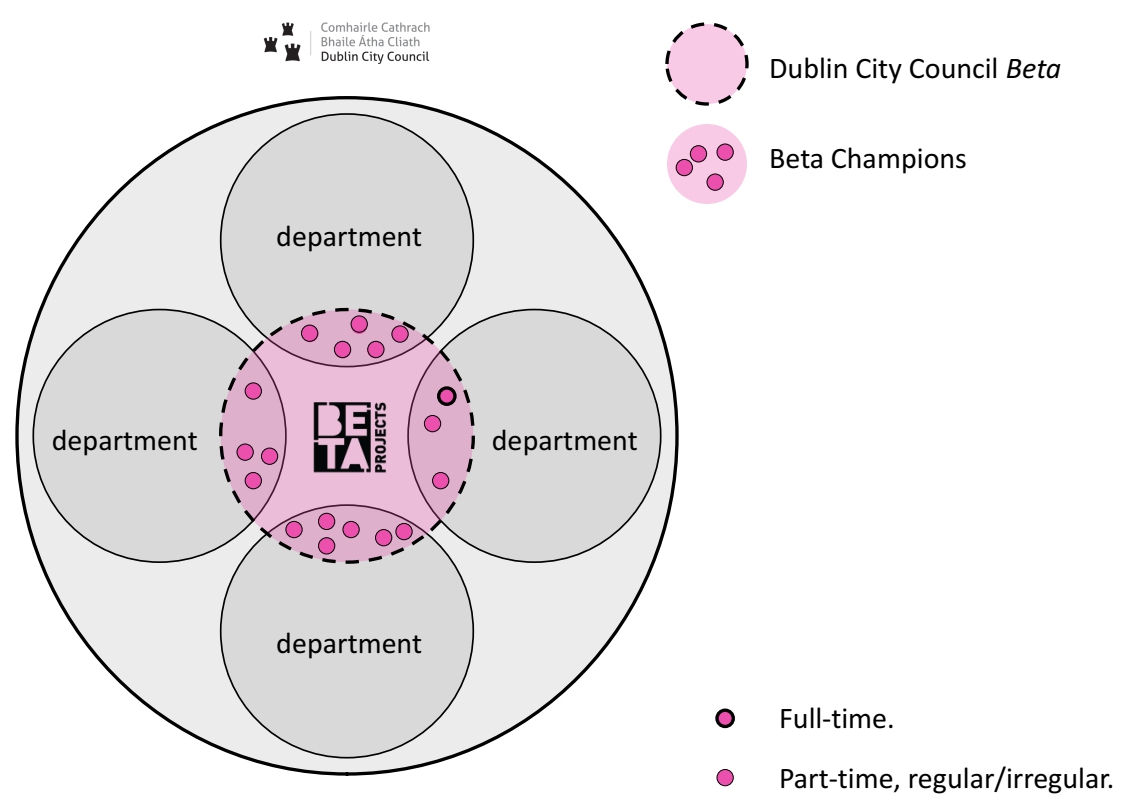 (It’s an experiment – let’s see how well it works in reality over time!)

“The informal approach encourages feedback from the public and allows for projects to be tested without having to commit.”

“It offers a framework when trying new things, which is invaluable because it saves a huge amount of time.”

“You could see it as a kind of risk management section.”

“It complements many of the Council’s current and potential projects.”

“Beta also allowed me to connect with staff with whom I would not normally come in contact. This developed my understanding of how DCC works and what other services we provide.”

“Greater communication and synergy between DCC sections through something like the Beta project results in an increased appreciation of the role of DCC as provider of public services; within sections it is easy to lose sight of the bigger picture.“

“It put me in touch with all the stakeholders that would be involved in such a project, and strengthened working relationships in that regard.”

“Beta allows staff to come up with novel ways of doing things and encourages inter-departmental solutions. The informal approach encourages feedback from the public and allows for projects to be tested without having to commit.”

“I think the whole concept of the Beta Projects is a very positive inventive way to encourage innovation and risk reduced planning for any city. The idea that there is a location to trial new ideas, to encourage new ideas and then to remove some / most of the risk involved in the funding of the project must be seen as the way forward for any pro active city trying to meet the needs of its citizens. I currently cannot see any negatives or “down sides” to the project and I think if I was involved directly in trying to change the city or people’s perception of the city I would like to have this type of platform to trial new ideas without the fear factor being involved.”

“It […] provided a way of finding out what small issues might arise or become problems if the solutions are rolled out on a larger scale (it usually is the smallest things that turn people off a new idea).”

“It’s a great way of trialling new ideas to get an idea of the issues involved in up-scaling. It could be done for a whole range of projects to encourage support at a local level before rolling out the larger projects. You could see it as a kind of risk management section. It could be used for many larger engineering projects for which there may be local opposition.”

“The trialling of a possible solution at low cost initially to see if it would be successful. If it is not successful, then little money has been wasted and it could point the way to a successful solution.”

“We could use it to inform and reduce risk on larger projects.”

“I see one of the key benefits being providing an outlet for staff creativity and helping with staff morale.”

“One of the most inspiring things that I have seen in years.”